The best Rock Climbing in the Gorges du Verdon

The Gorges du Verdon is often called Europe’s Grand Canyon, but in the climbing world it’s more like Europe’s Yosemite Valley. There’s enough climbing for 10 lifetimes. 350 m of beautiful bullet-blue limestone once considered too high and featureless to be climbable now has 1500 recognised routes, including some of the world’s best hard multi-pitch routes. Some of these routes can only be accessed by abseiling into them and setting up hanging belays. Other single pitch sports routes are a lot less committing and can be accessed from the valley floor. The scale of the place renders the atmosphere intimidating for Verdon newbies, but as a consolation, the variety and quality of the rock is superb with tufas, crimps, chimneys and perfect limestone pockets.

The big wall climbing in Verdon is far more committing and involved than a lot of other places in the world because you do have to approach from the top of the cliff and rappel down and pull your ropes. And then you’re just down there dangling in space, and the only way out is to climb out.
Emily Harrington

Book a Rock Climbing Trip in the Gorges du Verdon

Our rock climbing partners offer full-day and half-day climbing trips and cater to all abilities and group sizes. Rock climbing is an extreme sport which takes place in magnificent mountain terrain in remote locations. Take a guide, you’ll be safer and you’ll have a lot more fun.

The Gorges du Verdon – The Birthplace of Sport Climbing

The Verdon is the setting for some of the most ground-breaking and incredible ascents from the earliest days of sport climbing. L’Escalès is the largest of the climbing areas in the Gorges du Verdon. The 350 m cliff has over 300 single-pitch and multi-pitch routes from 5c to 8c (French grade). L’Escalès is famous for its highly committing multi-pitch routes that you must abseil into before pulling the ropes and climbing out from a ledge or a hanging belay.

It’s not all like that though. Big routes like La Demande and ULA can be accessed on foot from the Sentier Blanc-Martel.

Gear wise you’ll need double 60 m ropes and 18 or so quickdraws, and although the routes are bolted it’s a good idea to bring a small trad rack. It’s also worth noting that on some of the older big wall routes the bolts are well spaced out. Verdon veteran Alan Carne recommends having one or two skyhooks in your arsenal to help bridge the gap through harder sections.

La Demande is one of Verdon’s legendary climbs. At 375 metres it’s the longest climb in the Gorges and was one of the first routes up the famed north rim. In that respect, the climb is symbolic of an era and the crack climbing is more Alpine expedition than Verdon sport climbing.

The final 3 pitches on the upper chimneys have a fearsome reputation, but with more fixed protection added over the years, they’re not as formidable as they once were. Despite this, it’s a good idea to bring a small trad rack with nuts and cams from 0.5 to 2″. With 11 pitches from 5c to 6a+, La Demande is a long climb which will take the average team about 6 hours to complete.

To access the route you have two options: You can either abseil down the Dalles Grises or access on foot via the Sentier Blanc-Martel. 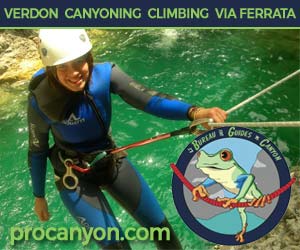 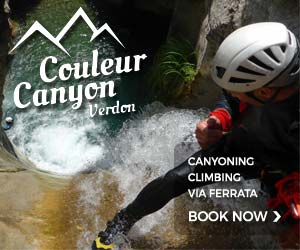