The best Rock Climbing spots in the South of France

Provence and the Southern Alps have attracted rock climbers from all over France for a long time, but the region’s climbing is so good that it also draws an international crowd. With its dry climate, winter sun and easy transport links, the south of France truly is a hot ticket destination for rock climbers.

Book a Rock Climbing trip in the South of France

Our rock climbing guides offer full-day and half-day climbing trips and cater to all abilities and group sizes. Rock climbing can seem quite daunting at first, but it’s actually an extremely safe and accessible sport. Even if you’ve never climbed before, you’ll be amazed by what you can achieve under the instruction of a qualified guide.

Where to go Rock Climbing in the South of France With more than 80 spots and over 3500 routes, there’s masses of climbing in the Alpes Maritimes. Steep wall, vertical, slab, bouldering, deep water soloing, you name it, you’ll find it here. Add to this the glorious sunshine and routes accessible year round and you have a fantastic destination for your next rock climbing holiday. 68 km inland from Nice, near the village of Sigale, Aiglun has some of the hardest big wall climbing in the world, including an 8 pitch route averaging 8a. There are two separate walls at Aiglun, ‘la paroi Saint Martin’ and ‘la paroi dérobée’. Both vertiginous walls harbour finger-shredding limestone routes mostly in the 7a to 7c range.
Rock: Limestone. Max height: 300 m. Grade: French 5c to 8b.
Number of routes: 50. Lat long: 43.864444, 6.908889 Just 40 minutes inland from Nice, the Collet Saint-André dominates the landscape near the picturesque Provencal village of Bonson. Here you’ll find a vertical single pitch crag that has been bolted for 20 or so sport climbing routes. The spot also has some bouldering problems in the 6a to 6c range.
Rock: Limestone. Max height: 20 m. Grade: French 4a to 7a.
Number of routes: 25. Lat long: 43.862778, 7.188611 10 km inland from Menton on the road to Sospel, look for the car park on the hairpin 1.5 km before you reach Castillon. A 20 minute walk will bring you to the bolted single-pitch crags with sport climbs from 6c to 9a. It’s roasting hot here in the summer, so it’s a great winter climbing spot. A good variety of climbing including the 45º overhang on the Arcade crag.
Rock: Limestone. Max height: 40 m. Grade: French 6b to 8c+.
Number of routes: 55. Lat long: 43.828333, 7.481389 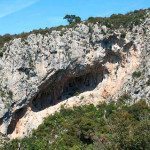 20 km from Nice in the mountains behind Monaco, the Grotte de Peillon is one of the most scenic climbing areas in the region. A 35 minute approach brings you to single-pitch and multi-pitch bolted routes on vertical and steep wall rock. Cracks, crimps and pockets provide a good variety of climbing with some sections requiring dynamic moves.
Rock: Limestone. Max height: 80 m. Grade: French 6b to 8c.
Number of routes: 38. Lat long: 43.788889, 7.403889 Les Gorges du Loup is a spectacular canyon located 45 minutes drive from Nice in the mountains behind Cannes. The Déversé section is single pitch, bolted sport climbing with interesting crimps, ribs and tufas. It’s heavily overhanging, difficult climbing, but the variety of features make this a memorable spot. It’s also one of the few crags in the area that stays cool in the height of summer.
Rock: Limestone. Max height: 45 m. Grade: French 8a to 9a.
Number of routes: 53. Lat long: 43.738611, 7.000278 La Turbie has routes of all grades across many crags, including nearly 50 hard climbing routes in the 7 and 8 grade range. All climbing styles are catered for with cracks providing a lot of the holds. You’ll find single-pitch and multi-pitch bolted sport climbing with many routes over 30 m. La Turbie’s setting is stunning with views over Monaco and the Mediterranean. Access is 20 minutes walk from the La Turbie car park.
Rock: Limestone. Max height: 120 m. Grade: French 3c to 8a.
Number of routes: 400. Lat long: 43.731111, 7.401944 Stretching from the Mercantour National Park and the border with Italy in the east to the Lubéron in the west, and the jaw-dropping Gorges du Verdon running along its border with Var, the Alpes-de-Haute-Provence has a huge amount of world-class climbing. Thanks to the great weather you can climb year round, and the pocketed limestone and slabs of sandstone of the region makes the climbing interesting and varied. Whether you’re into bouldering, trad or bolted climbing, and whether you’re just starting out or you want to push the limits of the sport, you’ll find your perfect spot in the Alpes-de-Haute-Provence. Annot is all about the sandstone. Bouldering, trad, bolted, single or multi-pitch, Annot has hundreds of routes for all levels. In the heart of Le Site Naturel des Grès d’Annot you’ll find huge sandstone boulders up to 20 m high dotted around amongst the chestnut trees. Within easy walking distance of Annot village there are 150 bolted routes from 4c to 8c. Trad climbers should head to western and south-eastern sides of the sandstone plateau. The Bureau des Guides de Canyon are responsible for opening a great many routes and maintain a blog packed with info on trad climbing in Annot.
Rock: Sandstone. Max height: 50 m. Grade: French 4c to 8c.
Number of routes: 150. Lat long: 43.959955, 6.682659 Described as Europe’s Grand Canyon, so steep and high are the walls of this Provencal gorge in places you can dangle in the void with the Verdon river 350 m below. Recognised as the “Birthplace of Sport Climbing”, climbing greats like Ron Fawcett and Alan Carne pioneered climbing here in the early 80s. The hard limestone is sculpted with holds that span routes now carved in folklore, like La Demande and Les Dalles. Located 5 km from the cliffs, La-Palud-sur-Verdon has accommodation, a supermarket, restaurants and gear shops, so makes a good base for rock climbing on the north rim ridge of the gorge.
Rock: Limestone. Max height: 350 m. Grade: French 5c to 8c.
Number of routes: 1500. Lat long: 43.775629, 6.385027 Legendary Verdon climbing spot with some insanely hard routes and first ascents as recent as 2010. Accessible only by boat, it’s a 10 minute paddle from Aiguines beach on Lac de Saint-Croix into the canyon to reach La Grotte du Galetas. Unmissable, the ceiling of this huge orange overhang is nearly horizontal. The super-hard 50 m sport climbs have long attracted climbing’s elite. In 2010, the Czech Republic’s Adam Ondra was the first to climb the 9a Les 3 P, and in 2015 The North Face featured Galetas in its Night Ray Festival.
Rock: Limestone. Max height: 50 m. Grade: French 5c to 9a.
Number of routes: 25. Lat long: 43.800389, 6.253980 Quinson is a great spot whether you’re an experienced climber or you’re new to the sport. More than 200 routes from 3c to 8b adorn a limestone cliff that’s mostly vertical with a slightly overhanging section called Aspre towards the dam side. There are shady and sunny areas, so you can catch the early morning rays and move into the shade in the afternoon. The routes are a mixture of single and multi-pitch trad and sport climbing with the usual Verdon pockets, crimps and ribs. Park by the bridge, it’s an easy 10 minute walk in. Quinson is a good central location to be based for visiting other climbing spots in the area.
Rock: Limestone. Max height: 100 m. Grade: French 3c to 8b.
Number of routes: 200. Lat long: 43.694199, 6.033746 Esparron-de-Verdon sits on the eastern shores of the beautiful Lac d’Esparron in the lower Gorges du Verdon. A great base for a multi-activity holiday, the limestone cliffs are between 15 and 35 metres high with easy rock climbing routes suitable for newcomers and families. The site is located at the far end of Chemin de la Tuilière which runs past Campin le Soleil. You’re climbing at the water’s edge, perfect for a swim after a hot climbing session.
Rock: Limestone. Max height: 35 m. Grade: French 3c to 6a.
Number of routes: 12. Lat long: 43.728081, 5.968934 Pushed up against Italy and stretching from La Grave and Briancon in the north to Gap and Sisteron in the south, the Hautes Alpes is a sparsely populated Alpine wilderness. The jagged Ecrins National Park is home to the Barre des Ecrins, which at 4102 m is the highest mountain in the Hautes Alpes. Orpierre, despite only having 370 inhabitants is world famous for its rock climbing. Located at the foot of a gigantic rocky cirque, the sheer walls reach 1200 m and there’s fantastic climbing right on the outskirts of the village. Further north, in Sigoyer near Gap, is Céüze, renowned for having some of the world’s toughest climbs. So mere mortals can get a taste of the exposure, a via ferrata route has been built alongside. Briançon, the capital of the Hautes Alpes, promotes itself as ‘the town that climbs’ and each July plays host to the IFSC Climbing World Cup. Almost completely encircled by vertical rock, Orpierre lives and breathes climbing. It’s location just above Sisteron 150 km north of Marseille means year round climbing in a Provençal climate. East to west, the limestone crags extend for more than 1 km with 10 designated climbing zones all easily accessible on foot from the village. It’s nearly all sports climbing so you need plenty of quickdraws and a 70 m rope.
Rock: Limestone. Max height: 35 m. Grade: French 3a to 8c.
Number of routes: 500. Lat long: 44.314726, 5.695595 Home to Chris Sharma’s Realisation, one of the world’s hardest rock climbing routes, Céüse near Gap, is reputed around the world for its 9a+ routes but also the quality of its climbing generally. The 2016 m Céüse mountain is encircled by a 4 km long cliff face that ranges between 30 and 130 metres in height with single and multi-pitch sports climbing routes from French grades 4 to 9a+. Jutting out of a dense forest, these crags are certainly some of the most beautiful in France. From April to October in any one day you can expect to see up to 300 climbers from all over the world.
Rock: Limestone. Max height: 130 m. Grade: French 5a to 9a.
Number of routes: 469. Lat long: 44.49639, 5.94389

Chris Sharma returns to Céüse this time with Daila Ojeda to take on the Face de Rat 8a+. As always Chris is hugely motivating and judging by her climbing there's no doubt we'll be seeing a lot more of Daila in the coming years.