You are here: Home / Skiing in France

France has some of the world's best skiing. Modern lift systems serve immaculately groomed pistes and easy access to epic off-piste runs. The intrepid can strike out beyond the resort and explore a high altitude backcountry playground complete with amazing powder and massive vertical drop.

Skiing is undoubtedly France's most popular winter activity. In fact, according to Domaines Skiables de France (DSF), French ski resorts sold about 52 million “ski days” during the 2015-16 season. Here are some highlights: Head to Alpe d'Huez and ski Sarenne which at 13 km is the longest black run in the Alps. Or, take your next ski holiday in The 3 Valleys - with its 600 km of pistes during a week's skiing you never have to ski the same run twice. Backcountry enthusiasts will love Tignes and Val d'Isère located on the edge of the vast Vanoise National Park with some of France's best hut-to-hut ski touring itineraries.

All in all, France has more than 400 ski resorts across the Alps, the Jura, the Pyrenees, the Vosges, the Massif Central and even the mountains of Corsica. The ski season generally lasts from early-December to mid-April, though it's shorter at low altitudes and longer in high Alpine resorts. Glacier skiing in resorts such as Les 2 Alpes, Tignes and Val Thorens means it's possible to ski well into summer. READ MORE

Once you've chosen your perfect destination from our list of top French ski resorts, you'll need to organise your accommodation, airport transfers, snowboard hire, lessons and for powder hounds, some off-piste guiding and heli-boarding.

We've got your back. We work with the best companies in the industry to help make your skiing trip to France one you'll never forget. Learn to ski in France with passionate English speaking instructors. Great value and reliable airport transfers to ski resorts across the French Alps. Book your ski rental in advance - it's cheaper and a lot less hassle. Find a backcountry guide and leave the boundaries of the groomed slopes behind. Find quality accommodation for all budgets across the French Alps. Ski and snowboard holidays in the best resorts across the French Alps.

OUR FAVOURITE SKI RESORTS in FRANCE

Skiers of every stripe flock to France each winter, from families and couples who enjoy the wide open pistes of Les 3 Vallées to serious freeskiers who pit their wits against the steep terrain of Chamonix, Sainte Foy and La Grave. We've spent seasons in France skiing in resorts in the Northern French Alps like Avoriaz and Tignes and the southern French Alps like Alpe d'Huez and Isola 2000. Based on our experiences, here's a selection of our all-time favourite ski resorts. SEE ALL RESORTS Morzine in the Portes du Soleil has access to an unbelievable amount of great skiing. With its lofty altitude and an abundant snow, Val Thorens offers an unforgettable holiday. Skiing in France is so much more than cruising the pistes and skiing as a sport is constantly reinventing itself. France is lucky to have the high mountain terrain and the athletes to be at the forefront of the evolution. People are pushing the limits of the sport like never before and modern skis lend themselves to faster progression on the slopes and being able to ski evermore extreme off-piste terrain.

Here you'll find info on some of France's best off-piste skiing, ski touring, heli-skiing and extreme steep skiing. You'll discover the most incredible backcountry descents where you can experience the thrill of skiing far from the ski lifts and crowded pistes of the resort. Get away from the crowds and carve your own lines down some of the French Alps legendary off-piste runs. Once you get a taste for powder, the first thing you’ll look for in a ski resort is its off-piste potential, and the access to great off-piste is better in some resorts than in others. From Chamonix to La Grave and the Tarentaise Valley, here’s a roundup of the best lift-accessed off-piste skiing that should be on every powder hound’s bucket list. This winter I’ve decided to keep it classy…ish – I’m going to mainly get my skis on in France, and I am going to max those Alps out like never before. Booyah! So, I have made myself a little must-ski list. I am not coming home until I have skied each and every one of the below runs at least once. These runs are, in my opinion, the best runs in the whole of France, so if you’re going to be around the Alps this ski season maybe try a few of them out – I promise you won’t be disappointed. 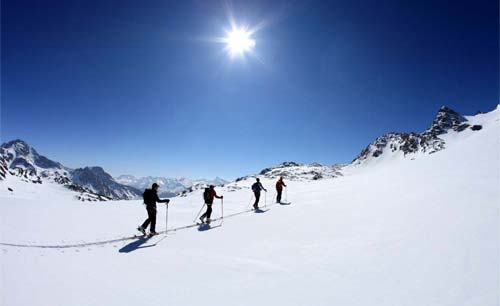 The French Alps is renowned for its easily accessible yet wild ski touring terrain. Strike out from Chamonix and access the Haute Route, possibly the most famous ski tour in the world. The Vanoise National Park in the Tarantaise Valley is undoubtedly one of the most beautiful areas of wilderness in Europe and a ski touring paradise. Or head further south and explore less frequented terrain in the stunningly remote Queyras Regional Park. The Vallée Blanche is what skiing is all about. If you’re in Chamonix and you’re a confident intermediate skier, this run is a must. It's a 23 km off-piste descent covering a massive 2800 m vertical drop from the Aiguille du Midi (3842 m) back to Chamonix (1050 m). The Vallée Blanche has every type of skiing you could possible want - steeps, ice, powder, couloirs and the high mountain scenery is second to none. There are four different routes that are run commercially, the most popular being the 'voie normale' or classic route. Escape the skilifts and take to the skies to access the best ski and snowboard terrain in the Alps, at the heart of the Mont Blanc Massif. Famously, heli-skiing is not permitted in France, but there are ways and means. A short transfer from Chamonix and you're in neighbouring Switzerland or Italy where it's perfectly legal to be dropped by heli to ski or snowboard pristine powder fields. You can even ski back into France. The French Alps most extreme terrain is accessible to expert skiers with mountaineering experience and a keen sense of adventure. You need to be comfortable skiing difficult off-piste terrain and have some high altitude mountaineering experience. With the expertise of a qualified guide, you can take on the Alps’ legendary couloirs and steep powder pitches. Discover the best of the French Alps’ insane steeps and get ready to push your skiing to the next level!

One of those days 2 - Candide Thovex in La Clusaz, France.

The best skier on the planet at his home hill. "This is the most fun I’ve ever had skiing and all I did was sit in my office and press play."

International airports for transfers to the Alps include Geneva, Chambéry, Grenoble and Lyon. For resorts in the southern French Alps like Isola 2000 and Serre Chevalier, you can also fly to Nice, Turin or even Marseille. For the Pyrenees, Pau and Toulouse are the major gateways, but you can also fly to Perpignan for resorts in the eastern Pyrenees and Biarritz for resorts furthest west.

French resorts tend to open early to mid-December and close mid to late-April. The tourist office in each resort will communicate the actual opening dates which can change depending on snow conditions. In the Pyrenees the snow tends to come in fits and starts with big dumps coming from Atlantic storms that can melt away quickly in a warm southerly wind.

January and February tend to have the best overall conditions, but there can be big queues for the lifts and crowded pistes during the February half-term holiday. Bear in mind as well that prices rocket during February and March and accommodation needs to be booked well in advance.

If it's been a good season for snowfall, skiing in April is hard to beat. No more frozen zips and numb fingers, on a sunny day in April you can often be quite comfortable skiing in a t-shirt.

December can be good if there's been a good coverage of early snow - the slopes are generally quieter and there are some great deals to be had on accommodation and lift passes. In high resorts such as Val Thorens, you can pretty much guarantee good snow from November. In fact, many of France's top freestyle skiers head to Val Thorens for early season training as the snowpark stays intact all year and is ready to ride from November.

Snow conditions in France can vary greatly from year to year, but despite some glorious winters in recent years, the French Alps face a warmer world. Snow cover is gradually receding with a trend of less snow at lower altitudes. To compensate, many resorts now have snow canons can spray artificial snow over problem areas, but these require below zero temperatures to work.

France has some of the world's best lift-accessed off-piste skiing combined with a refreshingly relaxed attitude to danger. That means there's little restriction when it comes to accessing the backcountry. Resort boundaries are clearly defined and you can duck under the ropes without being penalised. You are responsible for your own actions though, and accidents happen all the time. Avalanche risk is often high, especially on those days when fresh powder beckons.

So the advice is simple - take a guide. You'll be kitted out with an avalanche rescue kit and shown how to use it. And, your guide will show you the best, safest runs on the day. Make sure as well that you have insurance. For basic accident insurance that will cover getting you off the mountain, buy a Carte Neige when you get your pass.

Smaller, low-altitude resorts, which include resorts like Chamrousse near Grenoble, La Clusaz near Annecy, or the resorts in the Pyrenees and the Massif Central, are much cheaper than the popular international resorts in the Alps. The trade-off being that if you need to book your skiing holiday a long time in advance, you risk not getting great snow.

Still one of the cheapest ways to have a skiing holiday in France is to buy a package deal from a tour operator before you leave home. Packages generally include flights, transfers, accommodation, ski hire and lift pass. At the beginning and end of the season, as well as in January, many resorts offer promotional deals and you can find great discounts on accommodation and lift passes.

Tag your Instagram skiing pics and clips #activeazur to be featured here!

Please leave a comment below if you need specific advice for your ski trip to France, or if you have any recommendations to help us improve this page. Happy holidays!