Paragliding is a hugely popular sport in the south of France and for good reason. This is where mountainous terrain meets the sea creating world-class flying conditions and ample opportunity to take to the skies all year round. Hot sun draws warm air up south-facing slopes creating thermal rockets perfect for epic cross-country paragliding.

With the Maritime Alps stretching north from the Med, the coastal mountains of the French Riviera hinterland, the spectacular turquoise lakes of Verdon and the hot, dry mountainous terrain further west towards Aix-en-Provence, the south of France is one of the most spectacular flying regions in the world. There’s a great variety of flying in the region, ranging from coastal soaring to thermal flying, including one of Europe’s premier thermal sites, La Montagne du Chalvet in Saint-André-les-Alpes.

Experience the thrill of a tandem paragliding flight and see the Cote d’Azur from above, or take part in a course and learn to pilot your own wing. Paragliding schools offering tandem flights, discovery courses, pilot training and fly guiding operate throughout the region.

There’s also plenty to do when you’re not paragliding. You’ll find some of France’s best rock climbing, rafting, canyoning and via ferrata just an hour north of Nice and there’s challenging cycling and mountain biking as well. And, with great food and easy transport links, you really should consider the south of France for your next paragliding holiday! From paragliding spots right on the Mediterranean coast like Roquebrune-Cap-Martin near Menton to the Roya Valley and the hills of the Cote d’Azur hinterland, the Alpes Maritimes has a host of world-class paragliding spots. Expect views over the Esterel mountains, the Southern Alps and Italy, and conditions that lend themselves to epic cross-country flying. 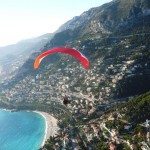 Where the Alps meet the sea, Roquebrune-Cap-Martin has to be one of the most stunning paragliding locations in Europe. Take off from the top of Mont Gros and land on the sand at Plage du Golf Bleu. Expect breathtaking views over Monaco, Nice, the Italian riviera, and on a clear day, even Corsica. Too busy with tourists in the summer, the spot is only open to paragliders from October to April. However, if you’re looking for a winter paragliding destination, Roquebrune is hard to beat.
Altitude: 700 m. Local Club: Roquebrun Ailes. Nearest Airport: Nice (38 min). Launch Lat/Long: 43.765473, 7.442654. Land Lat/Long: 43.759305, 7.455633. Hazards: Motorway, railway line. Season: 01 Oct – 30 Apr. Located near the Gorges du Loup 28 km inland from Cannes, Gourdon is a popular thermal flying site. XC flying is possible throughout the year and 170 km flights have been recorded. There are 2 straightforward south-east facing take-offs on the ridge, and a choice of landings, including an area maintained by the paragliding school, which gives you a 300 m top to bottom. The school operates a shuttle service in summer. You can drive to the top with just a 10 minute walk to take-off. Busy at weekends.
Altitude: 1150 m. Local Club: Lei Courpatas. Nearest Airport: Nice (42 min). Launch Lat/Long: 43.722882, 6.943924. Land Lat/Long: 43.721877, 6.976710. Hazards: Turbulent in N winds, sharp stones at take-off. Season: All year. Col de Bleyne is arguably one of the best paragliding sites in France, and the starting point for several record cross-country flights. The take-off faces directly south on an east-west oriented ridge. Thermal activity begins early providing the opportunity for some epic out-and-return and triangle flights. Although the site works best in spring and summer, it’s still possible to get some decent altitude in winter. The top to bottom is about 400 m and there’s some big fields to land in both in the valley and along the route to Saint André.
Altitude: 1513 m. Local Club: Au Gré de l’Air. Nearest Airport: Nice (1 h 6 min). Launch Lat/Long: 43.814480, 6.803104. Land Lat/Long: TBC. Hazards: Turbulent in W winds, shrubs at take-off. Season: All year. Fly one of Europe’s best thermal sites at Saint-André-les-Alpes, soar the stunningly beautiful Lac de Saint Croix and enjoy views over the Gorges du Verdon, or challenge yourself to some technical thermic flying over the Lac de Serre-Ponçon at St Vincent Les Forts. Paragliding in the Ubaye Valley | Go >

With 4 official launch sites, a beginner slope and 300 days of sunshine per year, paragliding pilots are flocking to the Ubaye Valley in ever greater numbers. A beginner slope named Point de Vue offers short 10 minute flights and straightforward take offs and landings. More experienced pilots can head to the Upper Ubaye Valley for some epic high altitude ridge flying. At Le Dôme de l’Alp above Sauze, the take off and landing are one and the same and on a clear day you can see the Mont Blanc. St-Vincent-les-Forts in the Ubaye Valley is one of France’s top paragliding sites. The steep-sided valley and thermal conditions make the area ideal for long flights and soaring, and the Lac de Serre-Ponçon forms a stunning backdrop. It’s technical flying though and reserved for experienced pilots only. The west facing take-off is short and susceptible to strong gusts on summer afternoons. Strong winds in the valley can make the flying unpredictable and bumpy. The main landing is at Camping Lou Pibou next to the lake.
Altitude: 1280 m. Local Club: Différen’ciel. Nearest Airport: Marseille (2 h 00 min). Launch Lat/Long: 44.443302, 6.371389. Land Lat/Long: 44.458393, 6.355827. Hazards: Short gusty take-off, punchy thermals, turbulent air. Season: All year. The spectacular landscape around the Gorges du Verdon makes for a uniqe flying experience. Ridge soaring, cross-country flying or riding thermals over the Valensole Plateau, it’s all here. Flying high above the luminescent Lac de Sainte-Croix you’ll enjoy dramatic views into the mouth of the Gorges, over lavender fields and the Mont Ventoux to the west and the high peaks of the Ecrins and Mercantour to the east. There are 5 launch sites – Pavillon, Mont Denier, Courchon, Marges, and Aiguines, and 3 landing sites – Pente Ecole, Reine Jeanne, Plage du Galetas. Expect tricky take-offs and bumpy air. The local schoold runs a shuttle up to Mont Denier in the summer.
Altitude: 1450 m. Local Club: ThermoDynamic Club. Nearest Airport: Marseille (1 h 34 min). Launch Lat/Long: 43.853884, 6.267268. Land Lat/Long: 43.831950, 6.223053. Hazards: Dangerous take-offs in E,SE,N winds. Season: All year.

Please leave a comment below if you need specific advice for your paragliding trip to the South of France, or if you have any recommendations to help us improve this article. Happy flying!