A guide to surfing in Hendaye

Hendaye is probably the best place along France’s south-west coast to learn to surf. The huge beach and mellow wave is perfect if you’re looking for rapid progression in safe conditions. And, there’s loads of decent surf shops and surf schools in town.

Hendaye is the best spot you’ll find in the French Basque Country to catch your first waves and progress your surfing. There’s no hectic lineups, aggro locals or pumping overhead barrels, just a fun and relaxed atmosphere with a mix of good surfers and surf schools in the water.

Hendaye is sheltered from the wind and big swells and the waves are on average half the size they are in more exposed spots further north. And, the beach is huge so there’s plenty of room to learn without wiping out the local pro.

Hendaye is the perfect playground for beginner surfers, the waves are rarely too big and the shallow beach takes the grunt out of the swell allowing you to surf in a wide range of conditions. In fact, the only time you can’t surf in Hendaye is when the swell’s too small, like less than a metre. There’s loads of surf schools in Hendaye, including some that operate year round, with board hire and professional instruction to take you from your first sketchy pop-ups all the way to cut-back perfection.

Hendaye has plenty to offer advanced surfers too. Its sheltered location in the armpit of the Bay of Biscay means you’ll get clean waves here when everywhere else along the coast is too big or blown out. At the northern end of the beach there’s a spot called Les Deux Jumeaux (named after the 2 big stacks of rock just off the beach) that longboarders and SUP riders will love.

Expert surfers will want to check out a reef break known as Vanthrax off the headland just to the north of Hendaye. It’s a huge, barreling left over a rocky bottom hundreds of metres from the shore that only works in especially big swell.

Straight out front of the casino there’s often a nice A-frame peak and both the left and the right are good. Or, at the far south of the beach just shy of the river mouth there’s another nice wave that wraps around the groin offering a good long ride.

Hendaye is a super-fun small-wave spot with a friendly atmosphere and plenty of room to learn and progress your surfing at your own pace. Plus, there’s loads to do in the area when you’re not surfing.

The Best Time of Year to go Surfing in Hendaye

Hendaye is good all year round. But, depending on your surfing ability, there may be a season that suits you better. In the summer, from June to September, the water’s warm enough to surf without a full wetsuit and the waves are smaller, so it’s a great time to take your first surf lessons. The downside of summer is the number of people in the water, particularly in July and August. Resorts along Basque coast gets pretty packed and Hendaye is no exception.

Either side of the summer months in April and May and October and November, the waves are bigger, more powerful and more consistent. The water’s a nice temperature, and a 3/2 mm wetsuit will be ample to keep you toasty for a 2 hour session. This is often a favourite time of year amongst surfers. There are far fewer tourists and that means you’ll have wave after wave to yourself.

Winter in Hendaye, between December and March is an opportunity for advanced surfers to rip it up in the biggest waves. The water temperature hovers around 10 degrees and there’s far fewer people at the peak than the rest of the year. The waves are often excellent, with more size and more power.

Hendaye also has the advantage of being quite sheltered, so it escapes the full force of the Atlantic swell and it’s often possible to surf here when nothing else along the coast is working. 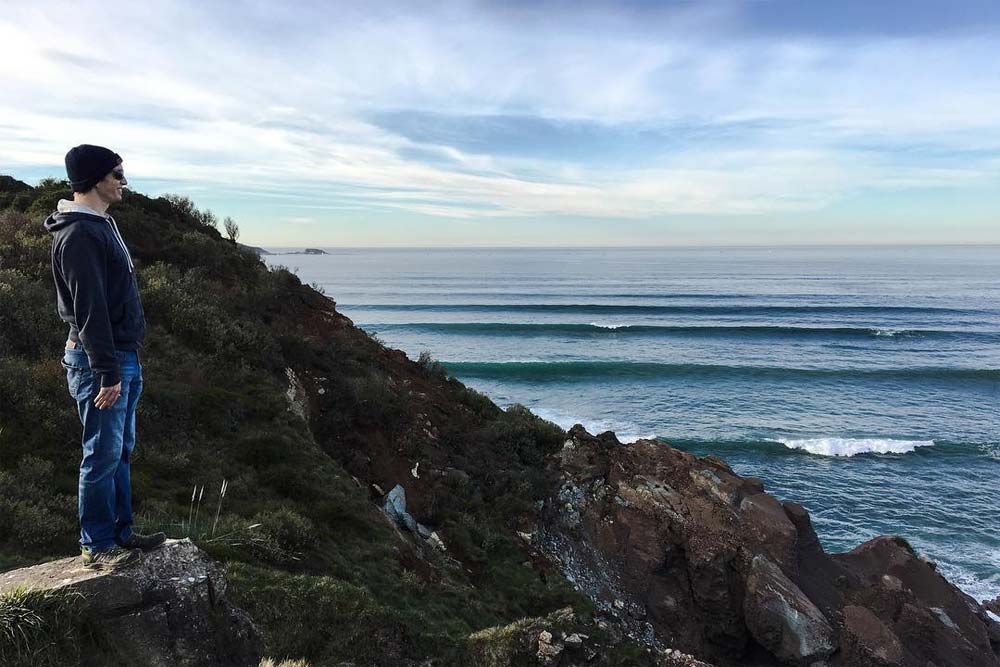 Vanthrax at the North point of Hendaye | © ActiveAzur.com

Vanthrax is a Basque Country big wave spot that’s still relatively unknown outside the surfing community. Thanks to the amazing images of local Hendaye surfer Hugues Oyarzabal dropping into a monster barrel and a short time later, world bodyboard champion Pierre Louis Costes doing the same, Vanthrax finally got the recognition it deserved in the international surf press.

Vanthrax is located off the headland at the northern end of Hendaye beach and the spot only begins to work in big swells. The few times a year it’s on, the wave kicks up huge left barrels that suck water over a rocky slab a few hundred metres off Pointe Sainte-Anne. The sheer size of the wave and the rocky bottom make this a dangerous spot. For expert surfers and kamikaze bodyboarders only.

Vanthrax isn’t a wave for everyone. You need to be a good surfer at the top of your game to paddle out here. And, accessing the peak isn’t straightforward. It’s a long hard paddle out, so the best thing is to have the use of a boat or a jet ski and get a ride to the peak. It’s a good idea to hook up with a local and be pretty confident in your ability before dropping into this heavy, barreling reef break.

A nice right over a mix of sand and rocks at the northern end of the bay. You can’t miss the spot, it’s marked by two huge stacks of rock that feature in most postcards of Hendaye. This section gets more swell than the rest of the bay, and with the rocky bottom, it’s only really suitable for advanced surfers.

Les 2 Jumeaux is a great pointbreak for longboarders. Located on the west side of the bay, this long right can dish out rides of a few hundred metres. It’s a straightforward wave to surf as there’s a nice shallow takeoff and it’s never too hollow. It’s ideal for both beginners and experienced surfers who just want to chill out and have fun. 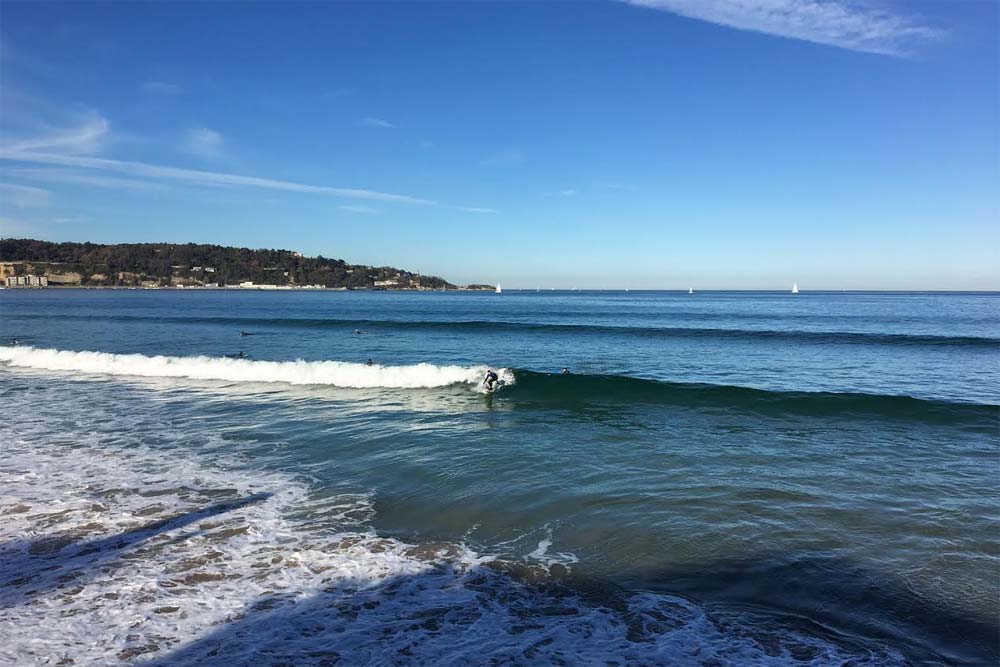 Right in the middle of the bay, in front of the casino you’ll find some of Hendaye’s best and most fun waves. There’s peaks popping off everywhere along the beach and you’ll see good surfers mixing it up with beginners with everyone just out to have fun. If it’s too big for you here, head towards the groin at the southern end of the beach.

Le Casino is Hendaye’s most famous wave. The spot serves up lefts and rights depending on the conditions with something for every type of surfer. There’s always a nice atmosphere in the water and there’s a number of peaks so you don’t need to be on top of each other. It’s also here that you’ll find a lot of surf schools, so if you’re looking for a surf lesson with a qualified instructor, this is the spot to head to. La Digue, sometimes called Sokoburu, extends north for a few hundred metres from the groin at the river mouth to the casino. The wave is smaller here, so it’s another good spot for beginners and a good option if it’s blown out further north.

This is a safe spot with easy waves and often less people in the lineup than at neighbouring spot, Le Casino. As it’s quite protected, this is also a good spot to head to if the swell’s too big elsewhere.

Please leave a comment below if you need specific advice for your surf trip to Hendaye, or if you have any recommendations to help us improve this guide. Happy holidays!