The 5 km long Almanarre beach on the Presqu’île de Giens near Hyères is one of the top kitesurfing spots in France. Popular amongst French kitesurfers, it’s also attracts international riders because of its long sandy beach and consistent wind conditions.

Add your service to this spot

World famous Almanarre on the west side of the Presqu’île de Giens near Hyères is the beach where windsurfing and kitesurfing legend Eric Thiémé cut his teeth. Testament to the quality of this spot, every year, the French national kitesurf championships pass through, and the spot also hosts the Gold Games freestyle comp.

In a south westerly or if the Mistral is blowing, l’Alamanarre is onshore with waves the whole length of the beach. In an easterly, the water’s completely flat. These are the two best conditions for the spot. You just need to be confident up-wind if you’re heading out in an easterly as this is offshore. Mistral conditions can produce some powerful gusts, but you know you can always get back to the beach. The waves tend to close out so are better for jumping than surfing. In summer, when the Route du Sel is open, you must stay within the restricted area.

The beach at the launch site is very narrow and crowded when the conditions are right. At Almanarre it quickly gets deep, and if you add waves to the mix, getting up and riding can be tricky even for intermediates. You’re better off heading up the beach to La Madrague where there are less people, shallower and less wavy. It’s possible to kitesurf between the two spots just by following the beach its entire length.

The launch area is marked by two wooden signposts adorned with FFVL flags in the summer. It’s only 150 m long and the beach is narrow, which means in gusty conditions, getting launched can be challenging and not suitable for beginners. Restrictions in summer mean that once you’re in the water, the navigable zone is marked out by buoys for about 300 metres, but once outside this zone you’re open to ride the whole of Almanarre bay.

If Almanarre is too crowded, another option is La Madrague. It’s essentially a continuation of the same long sandy beach, but it’s quieter, less wavy and shallower further out.

The kite zone is marked out by buoys in summer and is standing-depth at its most southern end.

It’s altogether less stressful here as both the beach and car parks are less crowded than at Almanarre. Unattended vehicles are still vulnerable to thieves however, so keep valuables out of site so as not to encourage opportunists. Campervan drivers be aware that height restrictions may stop you accessing car parks.

Eden de la Presqu’ile is a really nice B&B located 1.5 km from Almanarre beach. Rooms are air-conditioned and en-suite and each room is equipped with a TV, kettle, fridge and free wifi. Continental breakfast is served daily and a fixed-menu dinner is available on demand.
Allée des Genêts, 83400 Hyères, France. Tel +33 (0)4 94 12 26 81

There are loads of options if you want to camp. The four star Camping La Presqu’île de Giens is a good choice and offers tent and caravan sites, and mobile home and chalet accommodation as well.
153 Route de la Madrague, 83400 Hyères, France. Tel +33 (0)4 94 58 22 86

Further down the peninsula towards La Madrague is the 4 star Camping International, which has a range of apartment and mobile home accommodation, and tent and caravan spots, plus a family-friendly pool complex, on-site kitesurf and windsurf school and bike hire.
1737 route de la Madrague, 83400 Hyères, France. Tel +33 (0)4 94 58 90 16

Restaurants are plentiful at the Hyères port, a bustling, short strip of bars and restaurants on the eastern side of the peninsula. 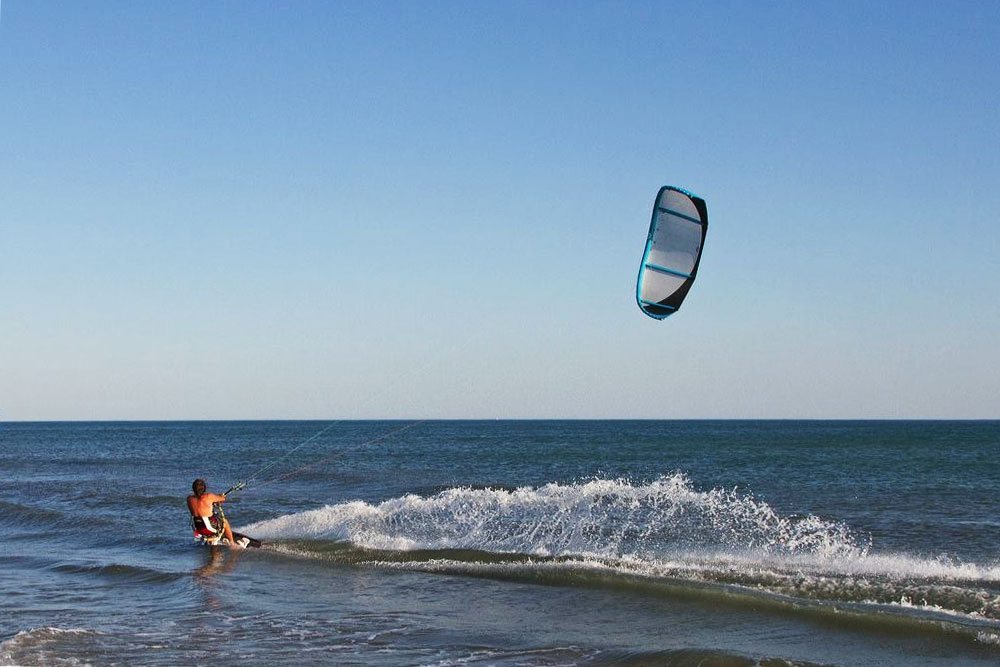