A guide to surfing in Saint-Jean-de-Luz

With lots of options for surfing, Saint-Jean-de-Luz attracts surfers from far and wide especially when it’s too big or onshore at the beaches further north. If you surf regular and you dream about a long right hander where you string together your front-side turns, then you need to get yourself to Lafitenia. This famous reef can provide rides of many hundreds of metres with lovely sections carving out big turns.

In Saint-Jean-de-Luz bay itself, there are two stand-out surf spots; Sainte Barbe and La Bougie near Socoa. Both these spots work in big swells and can be a good option in the winter when the surrounding beaches are maxed out.

You should also make the most of the location when you’re out of the water. Saint-Jean-de-Luz is a picture perfect seaside town and the most Basque of the region’s beach resorts.

Take a stroll along the promenade and round the working harbour with its fishing boats painted in traditional greens and reds. Grab a homemade ice cream from one of the Glaces Lopez vans dotted around town, or stop for a seafood lunch at the market.

Check out our active holiday guide to Saint-Jean-de-Luz for things to do and the best places to sleep, eat and drink.

Watch this: Lafitenia from the sky

Saint-Jean-de-Luz’s ocean beaches can get pretty gnarly in winter. If you’re learning to surf, you should aim to be here sometime between May and September – the waves are more beginner friendly and the water’s nice and warm.

Our favourite time of year is September because the summer holidaymakers have mostly gone home and the lineup is less crowded, the water’s still nice and warm and you tend to get a bit more swell than in July and August.

South of Guéthary and to the north of Lafiténia is picturesque Mayarco Beach. The spot works in a westerly/northwesterly swell, but the wave’s not much to write home about – it has a tendency to close out and lacks the power of Lafiténia. However, there’s a surfable peak at either end of the bay and the lineup’s a lot less crowded than surrounding spots, making it a good option if you’re just starting out. To access the spot, head to Acotz and follow Route des Plages to Tamaris Plages campsite which overlooks the beach.

Mayarco is a mellow, beginner-friendly spot that’s ideal for a relaxed surf in beautiful surroundings. It’s a short walk down to the beach, but when you first set eyes on the spot you’ll be blown away by the beauty of the place. The surfing’s pretty ordinary though and you’re unlikely to find the best waves of your trip here, but the setting in itself makes it worthwhile. If you’re looking for somewhere to spend a sunny afternoon on the beach with friends with some surfing thrown in for good measure, Mayarco is hard to beat. There’s parking along Route des Plages behind the beach. Bibam Snack overlooking the beach does great burgers.

Lafitenia is a righthand pointbreak that works best in a westerly or northerly swell with a southerly wind. When the conditions are right, you can pick long right-handers one after the other. The only downside of the spot is that it’s often crowded, especially at lunchtime when surfers from the nearby Quiksilver offices descend on mass. To access the spot, park in the car park along Route des Plages and follow Chemin de Lafitenia down to the beach.

Lafitenia is the most famous pointbreak in the Basque Country. This beautiful wave is reputed around the world for the length of the ride, which on a good day can be hundreds of metres long. The take off can be pretty radical but once you’re in the wave there’s a nice wall to play with and enough time to link up some turns and cut back into the occasional hollow section. Immediately south of Lafitenia, Erromardie beach is popular with tourists and surfers who descend on mass from nearby campsites. The bottom’s a mix of sand and rocks and in a southwesterly swell the spot holds a long left that starts at the southernmost end of the bay and leads into a nice wall through the mid section. Off the headland at the northern end of the bay, there’s a point-break that can throw up huge rights when the conditions are right, but watch out for the rocks. You’ll find plenty of parking along Chemin d’Erromardie which runs parallel with the beach.

Erromardie is a superb beach that’s pretty quiet out of season. You can surf here but it’s not that consistent and the rocks make it quite dangerous especially at low tide. When it’s working, there’s an easy left that lacks a bit of oomph and is the only option for beginners. The big punchy right-handed reef break at the opposite end of the bay is only surfable at high tide and you can get barrelled here on good days. But, because of the rocks, it’s for expert surfers only. 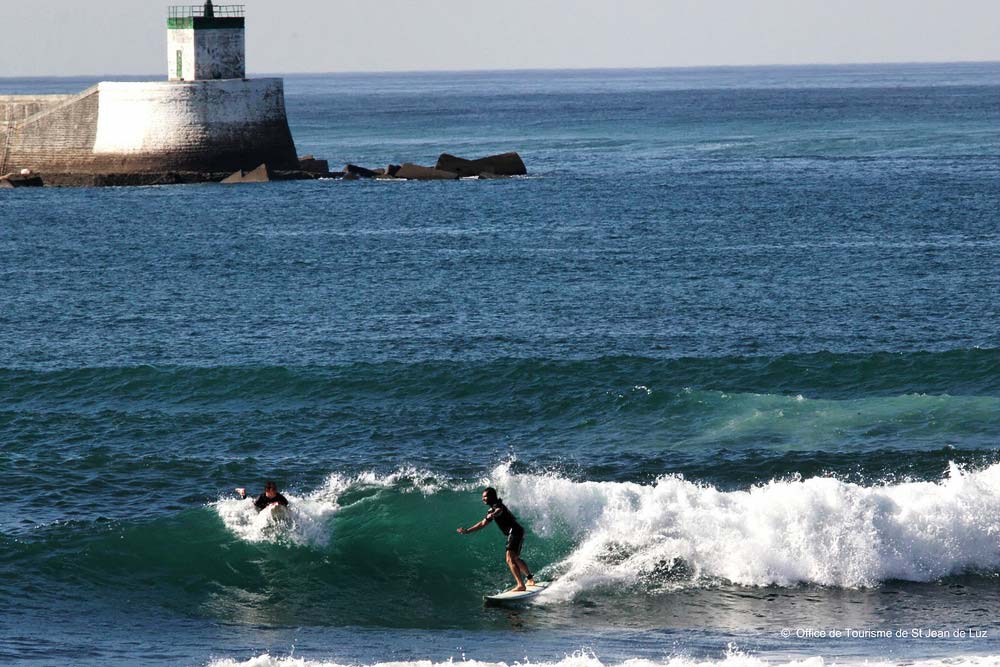 Sainte Barbe is a great spot to head to if the beaches nearby are maxed out. It needs a westerly swell to work well, but when it does it’s a nice long right. The drop and first section of the wave are intense, but then you’re into a nice wall where you can piece together a few cut backs. It’s a good paddle out to the peak and there’s often quite a lot of water moving around near the jetty. It’s popular with longboarders and SUPs who can drop in that little bit earlier for a huge ride.

There’s another peak at the end of the wave called Les Flots Bleus that’s more mellow and good for beginners.

To access the spot head to the northern end of the bay. There’s parking just off the beach, but in summer it’s often full, in which case you’ll have to park in the streets heading up the hill to Sainte-Barbe.

Sainte Barbe is a long right-hander that breaks along the groin at the northern end of the bay in Saint-Jean-de-Luz. It’s an excellent spot particularly when there’s big swell. Even at 3 to 4 metres this reefbreak works providing plenty of thrills. It’s a long paddle out though and you’ll need 10 to 15 minutes to reach the peak, which goes someway to explain why it’s rarely too crowded. When it’s over 2 metres the wave becomes too hectic for beginners. On big days you need to be paddle fit and able to commit to big drops. Watch out for the rocks at low tide, Sainte Barbe is best surfed at mid to high tide. Socoa only works when a big northwesterly swell hits the harbour wall. The swell wraps round the jetty and forms a nice little wave that’s great for beginners and longboarders looking for a mellow session. Closer to the beach there’s a shorebreak that works during spells of huge swell. It’s fun for shortboarders, but word quickly gets out when it’s working.

La Bougie is the perfect spot for learning to surf. Even when the swell reaches 3 to 4 metres, the waves here are never more than a metre and a half. It’s a popular spot with longboarders, but you can also surf here on a shortboard on big days. The spot is easy to find – head past Ciboure to Socoa and park at the sailing club. When it’s working, the wave breaks about 100 metres beyond a beacon warning boats about the shallow bottom. Belharra is a reef located about 2.5 km off the coast of Saint-Jean-de-Luz. When there’s enough swell, a deep shoal kicks up a violent 8 to 15 metre wave that in the past, before the construction of the jetty, had been known to swallow ships moored at Socoa. Belharra only breaks very rarely during especially big winter swells. Some years it may not break at all.

Belharra was first surfed on November 22, 2002, but really hit the world’s surfing press in 2003 when Fred Basse and Sébastien Saint-Jean surfed waves estimated at between 20 and 25 metres at the Billabong XXL Challenge. On the 16 December 2016, Belharra reared up for the second time that year and Stephane Iralour paddled into a monster that earned him wave of the day. Needless to say, Belharra is for expert big-wave surfers only. It’s hard to believe, but on light swell days, Belharra is a popular dive site as the seagrass-covered shoal attracts abundant marine life.

If you’ve travelled to Saint-Jean-de-Luz expecting to see Belharra pumping and there’s nothing but a ripple, don’t be too disappointed, you can always call into a bar and enjoy a bottle of local Belharra beer instead!

Belharra Reef is the legendary big wave spot that breaks 2.5 km off the coast of Saint-Jean-de-Luz. During the biggest winter swells it can reach a monstrous 20 metres. Local tow-in surfers are in a state of constant readiness throughout the winter just in case everything lines up just right and the beast is unleashed. But, she’s a fickle beast and some years doesn’t make a single appearance. You can get a view of the wave from the Route de la Corniche between Socoa and Hendaye. You’ll need binoculars to really see the surfers in action, or for an even better view, hitch a ride on a local fishing boat.

There’s lots of good accommodation for surfers close to the beach in Saint-Jean-de-Luz.

You’ll find everything from swanky five star hotels to rustic B&Bs, and uber-cool boutique hotels to campsites near the beach. Here’s a selection of our favourite places to stay in Saint-Jean-de-Luz. 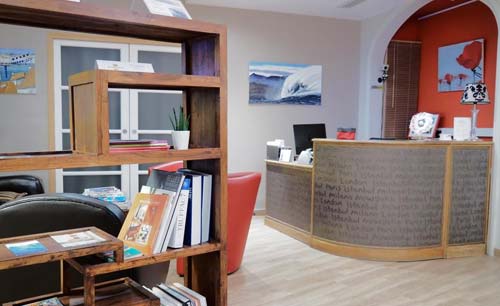 A small, friendly hotel in a great location a few steps away from Saint-Jean-de-Luz’s pedestrian area and a short walk to the beach. There’s free wifi and onsite private parking. A buffet breakfast is served each morning and rooms are air conditioned. Great restaurants nearby. Expect a warm welcome from the friendly and helpful staff. The hotel is just 500 m from the Erromardie surf beach. Try to get a room with a balcony and a sea view. Rooms are spotle ssly clean and breakfast is very good and evening meals are excellent value. Onsite secure parking.

Please leave a comment below if you need specific advice for your surf trip to Saint-Jean-de-Luz, or if you have any recommendations to help us improve this guide. Happy holidays!